Committed to replacing every recalled Takata airbag in Australia, Nissan has chartered a helicopter to fly mechanics into remote islands in the Torres Strait between Australia and Papua New Guinea. 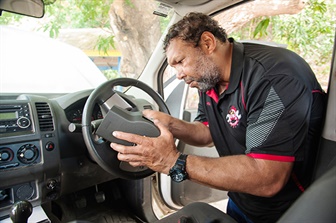 The Takata airbag recall was initiated by Takata Corporation in Japan after it was found that inflator components within the airbag could deteriorate and subsequently misdeploy in an incident, causing metal fragments to propel out of the airbag.

A global recall, in February the Australian Federal Government, in consultation with the ACCC, announced that it was now a compulsory recall, requiring all manufacturers to adhere to strict airbag replacement rules and regulations.

One of these requirements is to make special arrangements for replacement in certain circumstances, such as where a customer’s vehicle is located on an island or more than 250 kilometres from a Nissan Dealership or authorised repairer.

The day-long job started and finished on Horn Island - located at the northern-most tip of Australia - with two mechanics Island hopping as far north as Boigu Island, 15kms from Papua New Guinea, to replace the airbags from five vehicles.

The day-long job started and finished on Horn Island - located at the northern-most tip of Australia - with two mechanics Island hopping as far north as Boigu Island, 15kms from Papua New Guinea, to replace the airbags from five vehicles. “Nissan will not rest until every last recalled Takata airbag is replaced,” said Nissan Australia managing director, Stephen Lester

“I hope our commitment to the Australian Islands in the Torres Strait shows the lengths that Nissan will go to to get the job done.

“The recall affects a range of earlier model Nissans, so we strongly urge Nissan owners to check the VIN number with their local Nissan Dealership, go to the Nissan website or visit ismyairbagsafe.com.au to determine if the vehicle is included.

“If your car is affected, book the car in for the repair as soon as possible - which is done free of charge.”

Having sent out almost 890,000 communications to Nissan owners affected by the Takata recall over the last two months alone, there are still currently more than 120,000 Nissan vehicles subject to active recalls nationally that have not been presented for repair.

On Monday, the automotive industry launched the https://www.ismyairbagsafe.com.au/ website as part of the “Don’t Die Wondering” campaign in a joint effort urging motorists to check the status of their airbags.

Vehicle owners simply need to enter the registration of their vehicle and the State that it is registered in to immediately find out if their vehicle has recalled airbags fitted. Alternatively, they can text the word “Takata” to 0487 AIRBAG (0487 247 224) for further advice.

For more information on Nissan and the Takata recall go to: http://www.nissan.com.au/takata or contact your local Nissan Dealership to book your car in for airbag replacement.