Nissan has signed as the official automotive partner of the Hawthorn Football Club - one of the Australian Football League’s (AFL) power house teams - in a three year deal announced in Melbourne today. 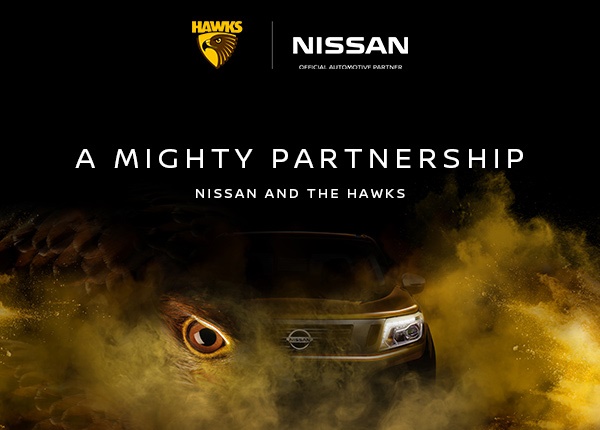 Nissan’s sponsorship with Hawthorn officially commences from December 10 and gives the global automotive giant the opportunity to be involved with a successful, high performance team with a national presence.

Nissan’s relationship with Hawthorn is designed to build brand awareness, strengthen engagement opportunities in the community, and will help to market Nissan’s range of innovative vehicles to a wider audience across multiple buyer demographics.

“Nissan, and our Dealers, are delighted to partner with the Hawthorn Football Club; today is a great day for the Nissan brand in Australia,” said Nissan Australia managing director Stephen Lester.

“Like minded in our approach, Hawthorn is the family club that has the fans and its members at the forefront of everything that it does, and this mirrors Nissan and our Dealers who are committed to our customers – past, present and future.

“This partnership enables Nissan to engage with AFL fans nationally and sustain our presence in the market. It represents an exciting opportunity.”

The Hawthorn Football Club is excited to welcome Nissan to its family and is looking forward to success in the years ahead.

“Nissan are an incredibly well-respected brand across Australia and the globe, and we are thrilled to be working with them in what is an exciting time for our club heading into 2019,” said Hawthorn chief executive officer Justin Reeves

“Nissan’s company ethos aligns closely with what our club stands for, with both organisations striving for the highest quality and success in everything we do.”

The sponsorship incorporates a range of entitlements including Nissan branding on the team shorts and coaches’ apparel, Hawthorn media backdrop and change room signage on game day. The sponsorship also provides Nissan with activation opportunities at home games, branding at the MCG and at games held in Tasmania, and access to corporate facilities - including the creation of the Nissan Lounge at the MCG.

Nissan has a history of AFL involvement. It was most recently a major sponsor at Richmond Football Club between 1998 and 2002, then returned to the Tigers in 2009 and 2010.

For more information on the Hawthorn Football Club visit www.hawthornfc.com.au

For more information on Nissan and its sponsorships go to www.nissan.com.au